Highlights From the Board of Education Meeting on Feb. 13 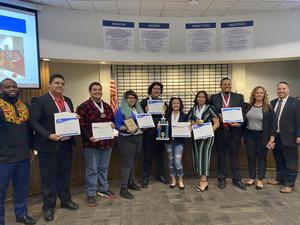 February 13, 2020 Board of Education Meeting

The following are highlights from the Lynwood Unified February 13, 2020 Board of Education Meeting.

You can find the meeting agenda HERE:

The competition consists of seven objective multiple-choice tests, a speech, an interview, and an essay.

Amazingly, the Knights enjoyed the second most-improved score (in comparison to last year) of any team in the competition – a turnaround of 13,160 points.

In honor of Black History Month, the District celebrated African American student achievement while spotlighting special events across the District. Students received 381 college acceptances, and $5.8 million in scholarships at the annual HBCU Caravan, in partnership with the National College Resources Foundation (NCRF). Helen Keller Elementary School enjoyed an African American museum project where students embodied important figures in history and shared facts and portraits. In addition, the District tied in excellence and inspiration by honoring the lives of Kobe and Gianna Bryant through a special slideshow collage.

Several school improvement service agreements were approved. The projects include:

Several donations were approved to be received by the District, including $45,000 from Kaiser Permanente for the Mental Health program. Feed The Children donated 586 pounds of assorted books, 97 pounds of assorted school supplies and 81 pounds of meal kits valued at a total of $7,689.56.

Resolution honoring the lives of Kobe Bryant and Gianna Bryant.

The meeting was adjourned in honor of Addison, Kobe, and Gianna.