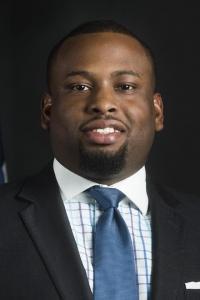 Named to State’s Student Opportunity and

Lynwood – Lynwood Unified Board of Education President Gary Hardie Jr. has been appointed to the California Student Opportunity and Access Program (Cal-SOAP) Project Grant Advisory Committee, a group of educational leaders who will advise on projects that provide college opportunities to underserved students and families.

Hardie was appointed by Assembly Speaker Anthony Rendon on July 18 after having spent more than a decade working in public education. In addition to serving on the Lynwood Board of Education since 2014, Hardie serves on the city of Lynwood’s Personnel Board, California Advancing Pathways for Students Board, California AfterSchool Network Leadership Team and is the Vice President of the California Association of Black School Educators.

“I’m honored to be selected to a committee that will play a role in making college more accessible to students throughout the state,” Hardie said. “Advocating for underserved students is a passion that has guided my path to helping our community through education.”

Cal-SOAP focuses on removing barriers to success for students from low-income families who would be the first in their family to attend college, who are from areas with low college-going rates or who are homeless. The program’s projects increase awareness of college opportunities and work to boost performance of high school students to increase their access to college.

Hardie, a former student of Lynwood Unified, is no stranger to creating higher education opportunities for students. In January, he worked with the District to unveil The Gary Hardie Sr. Memorial Scholarship, which awards financial support to graduating seniors going on to study the arts or service in the military. The scholarship is named in honor of Hardie’s late father.

During Hardie’s tenure on the Board, the District has strengthened student performance in the courses required for admission to UC and CSU. In 2017, LUSD was one of just three districts in the country to be named a College Board Advanced Placement District of the Year.

“Mr. Hardie has a strong track record of working to enrich the lives of students and families throughout the state,” LUSD Superintendent Gudiel R. Crosthwaite said. “His appointment will be of great benefit to Cal-SOAP and the countless families assisted through this program.”